Chander Velu is a Senior Lecturer in Economics of Industrial Systems at University of Cambridge and a member of The Productivity Institute’s Executive Team. This blog is based on a paper written by Dr Velu and his University of Cambridge doctoral student Wit Wannakrairoj, “Productivity Growth and business model innovation”, published in Economics Letters.

Why has global productivity growth been weak since the 2008 recession? And why has the UK experienced an even bigger slowdown in productivity compared to other major economies? It presents a puzzling picture given that it coincides with emergence of digital technologies with capabilities for improving productivity.

This anomaly—called the productivity paradox—has had academics, managers and policymakers puzzled and hypothesising possible causes.

The aftermath of the financial crisis continues to have an impact on markets. We also know that the inexorable rise of digital technologies has brought with it a number of challenges as well as opportunities: its take-up could be hampered by a lack of skills – and while some larger incumbent firms are performing disproportionately well, there remains a long tail of SMEs that are struggling to adopt the new technologies.

Moreover, there is the issue of whether we are measuring output appropriately in the digital economy given that some propositions such as web search engines are being given away for free. These could all be factors, but could there be other factors contributing to the productivity paradox?

How can we measure business model innovation?

What is the NATO ratio?

The NATO ratio is a measure of asset utilisation and efficiency which generally comes from the efficient use of property and equipment and working capital such as inventory. This ratio may not be changed significantly without a fundamental change in the business model.

Total Factor Productivity (TFP) has been attributed to the portion of output not explained by the amount of inputs used in production, which is a means of capturing how efficiently and intensely the inputs were utilised. The study analyses the impact of business model innovation as measured by the change in NATO on total factor productivity using data on over 15,000 UK firms across 19 industries between 2003-2017. The results show that the lack of business model innovation could explain the changes in productivity in the UK.

Online vs. brick and mortar

One focus of the study was examining firms in the retail book industry. The NATO is different for online bookstore (Amazon) compared to bricks and mortar bookstore (Barnes & Noble and Borders) as shown in Figure 1.

Moreover, innovations of the business models of these three firms during the period studied result in changes in NATO. For example, the Borders Group’s NATO increased after the introduction of its online store in 2008. Moreover, Barnes & Noble Inc merged its operations with Barnes & Noble.com and spun-off GameStop Corp, its gaming merchandise retailer in 2004 resulting in a rise in NATO. Amazon’s NATO captures changes in its business such as when the firm launched Amazon Marketplace which enabled third-part sellers on the Amazon platform in 2001 and launched Marketplace in 5 major countries between 2002-2003 among others. These case examples provide support for the proposition that changes in NATO is a good proxy to measure business model innovation. 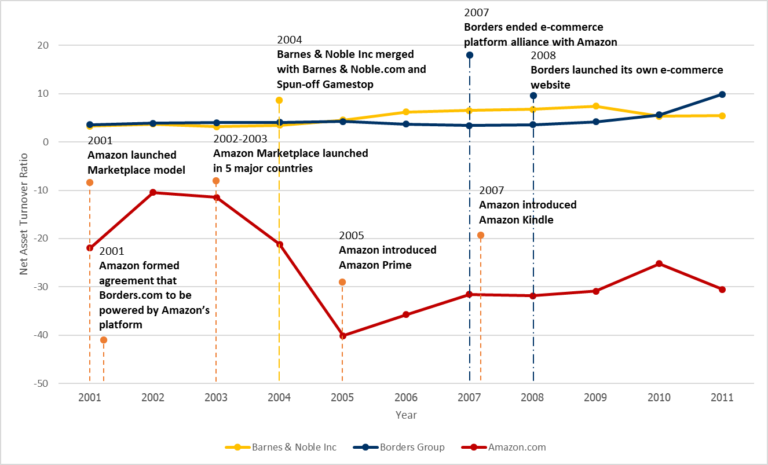 There are some major implications for both managers and policymakers. Managers need to focus on business model innovation when adopting digital technologies in order to fully benefit from the opportunities provided by new technologies. Moreover, policymakers need to support firms in their endeavours to innovate the business model and contribute to the solving of the productivity paradox.

Solving the productivity paradox is going to be critical if economies around the world are to increase the value of outputs and deliver economic growth especially following the pandemic. The development of digital technologies is creating plenty of opportunities to increase productivity but until firms are able to re-invent their business models we are unlikely to see the real productivity benefits at a national and global level. For individual firms, those that recognise that technological and business model innovation need to go hand in hand are most likely to derive the benefits from the digital economy.

This blog is based on the paper Productivity growth and business model innovation – ScienceDirect published in February 2021.

The idea of productivity